We have a laugh every day with Vasile’s cartoons and puns for Utopia Balcanica. It was a no-brainer to have him in the Spotlight.

Vasile: I’m Vasile, the guy behind Utopia Balcanica, a cozy little blog where Balkan lifestyle, music, opinion pieces, funny-ish listicles and cartoons (featuring awful puns) all get together to have fun. Once a day I take the subway to a little newsroom in central Bucharest.

That’s where I write for Times New Roman, Romania’s most popular satirical. Sometimes I do freelance work as a copywriter and illustrator, as well as other odd jobs that keep me learning cool new stuff. BTW, I made one of Romania’s pioneering webcomics, Mîţa cu î din i, and never got around to finishing Ars Moriendi, which is also a webcomic but I only wrote the script for it. 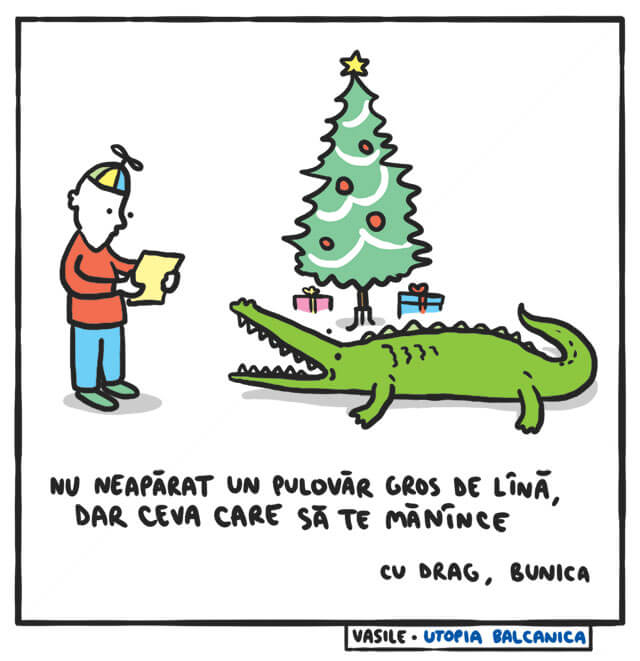 Vasile: Being raised by a writer and an artist turned me into half a writer and half an artist. It wasn’t half bad, now that I think of it.
Actually, one of my earliest memories is of my father making me a hilarious cartoon of our family. The hilarious-ness was that someone in the picture was missing a shoe. Hey, I was four at the time. I can still remember trying my hand at drawing the missing shoe, filling the rest of the page with awkward shoes and being really, really frustrated that I couldn’t get the shape right. I can draw a decent shoe now but the picture is long gone. 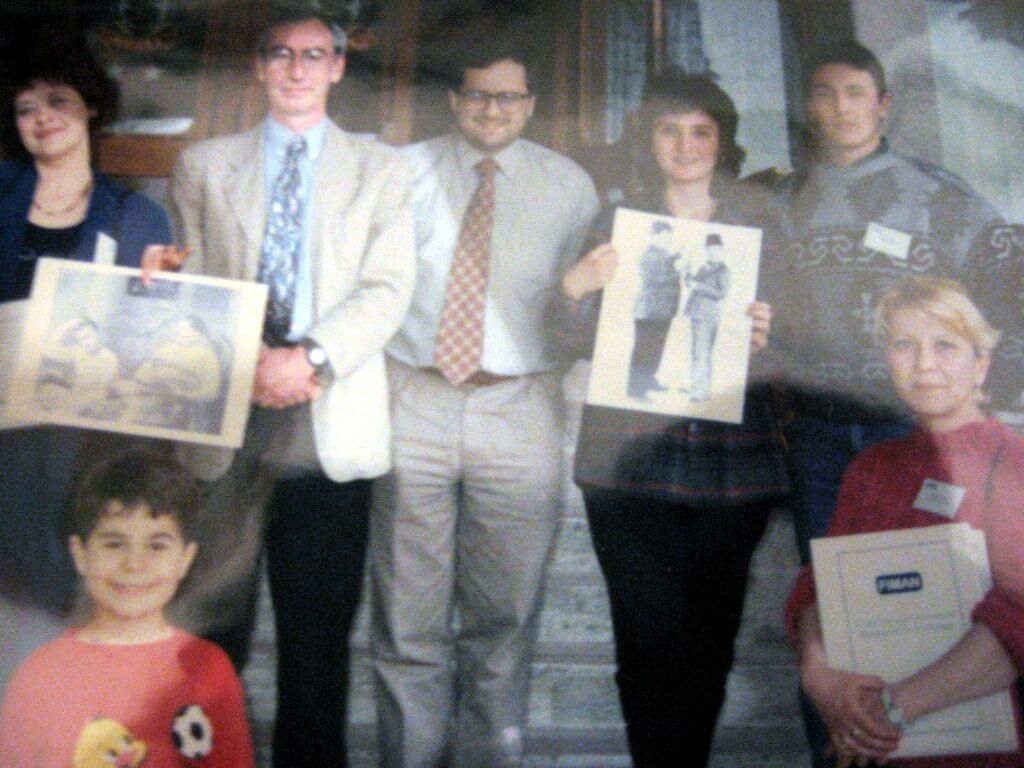 Here’s me photobombing some sort of conference in ‘97. And a bad watercolor I seem to have made in 8th grade. I’d gladly send you more pics, but I don’t have any with me.

Vasile: After the standard astronaut phase I think I decided I was going to be a journalist. Ended up getting a paper that says I am one. I still enjoy uncovering people’s dirty secrets or just digging around for trivia. Might even work in the field one day. 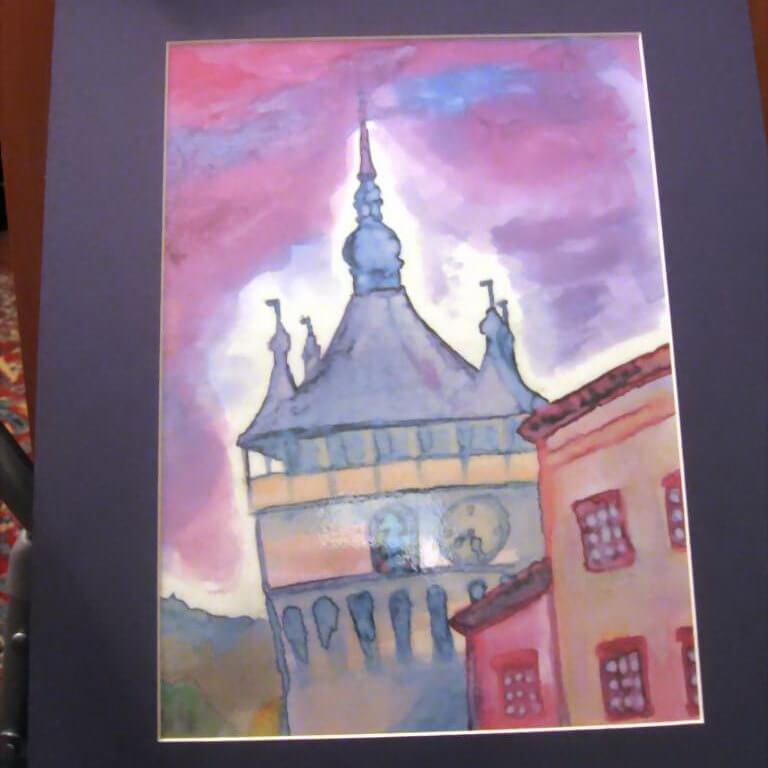 Vasile: Right now I’m out working on a Surface Pro 3, which is great because I wouldn’t send anyone photos of my home office or my office office. They’re both cluttered and chaotic and totally not artsy. 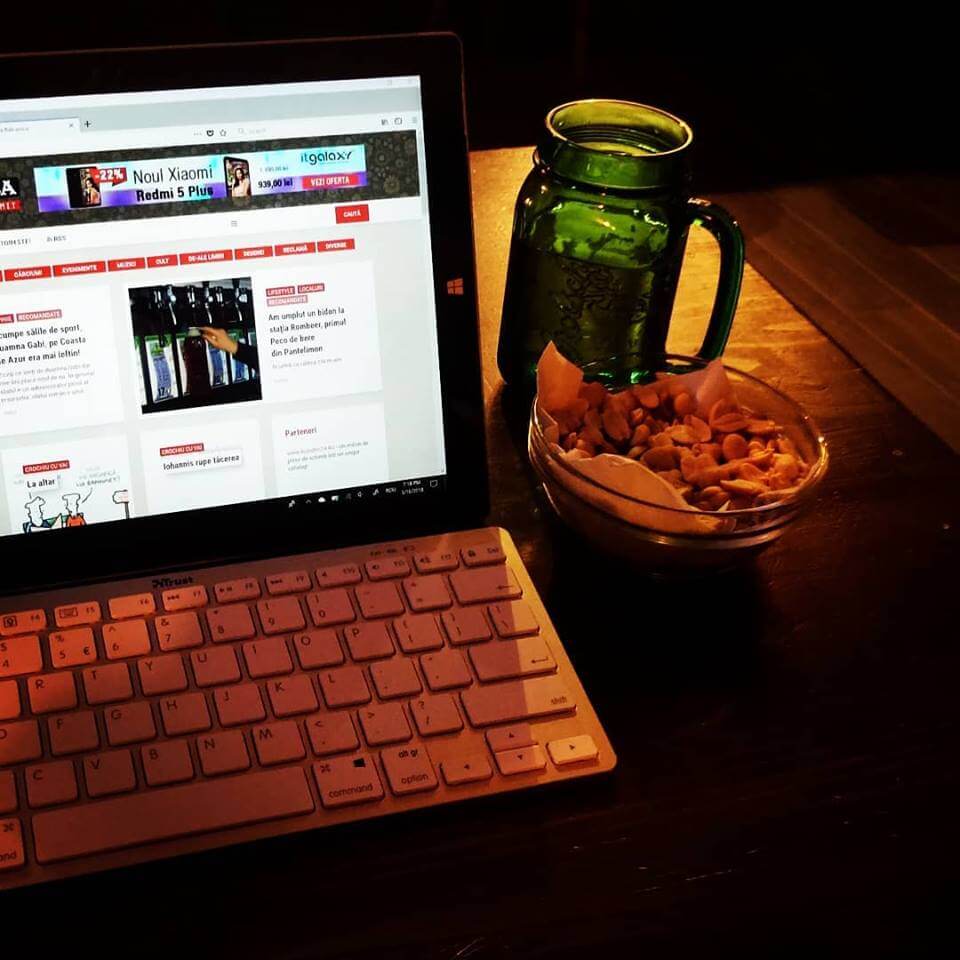 Vasile: Half-assed impostor somehow getting everything done. Details below.

Vasile: Gotta write a bunch? Procrastinate for days, then put on something uplifting (like the soundtrack from Warcraft 2 or electro swing or angry Russian ska) and finish days’ work in hours. Later regret you were such a lazy ass and consider flagellating self with a whip of guilt, but everyone likes what you made so why not bask in the glory. 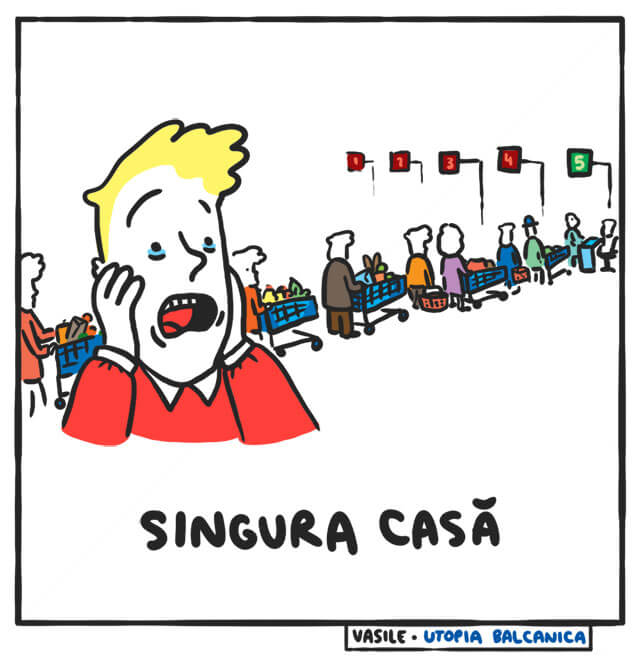 Wanna make silly cartoons? Jot down every random joke you come up with in a cheap Moleskine clone. Lose notebook between couch pillows. Find it a year later and use the gags that still seem funny to you to make said silly cartoons. Writing is a breeze. Most of the work is editing, making sure you haven’t used the same word twice by mistake, cutting up that endless snake of a phrase, reciting it in your head and putting in easter eggs for the reader.
Cartoons are easy too. This ain’t fine art. Nobody cares how good the drawing is. It just has to make ‘em giggle or think. Sure, I suppose a coherent style and recognizable characters are useful if you want to make a name for yourself, but otherwise just go have fun.

Vasile: That’s like asking a parent which of his kids is his favorite. He won’t tell you because his kids are just behind the door eavesdropping. Just browse my blog.(I constantly like my recent work and hate my old work, but doesn’t everyone?) 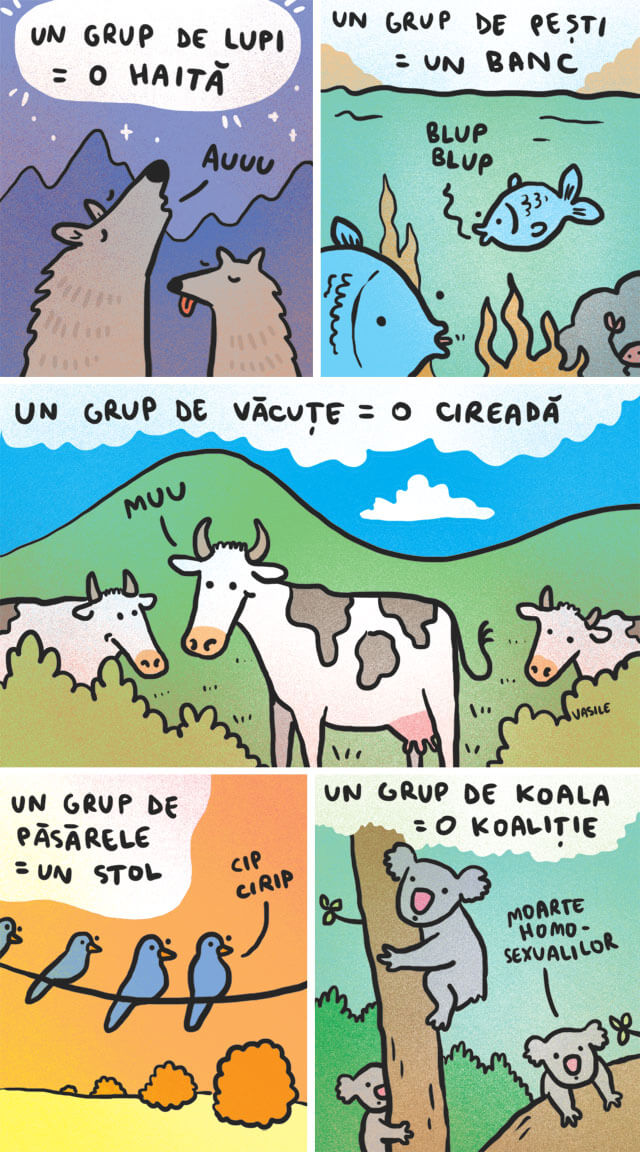 Vasile: I’ve grown too cynical to be anybody’s fanboy. But I enjoy being up to date with mainstream webcomics like SMBC, XKCD or QC. I also read a lot. Barely any fiction – I prefer the sciences. Medicine is fascinating, history is exciting, linguistics puts your brain to work. They’re all great building blocks for humor. And knowing the Latin name for every tree in the park is totally useless but fun. 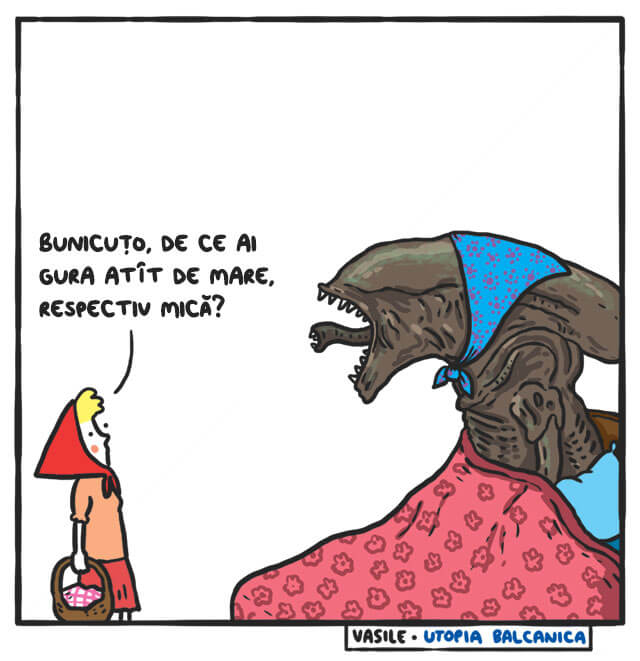 Vasile: Start a blog, go to events, friend people on Facebook, mingle. Find that balance between being way too discreet and rubbing your work in people’s faces. Oh and be honest. Don’t steal someone else’s work even if they’re some obscure Uzbek artist only you know about. 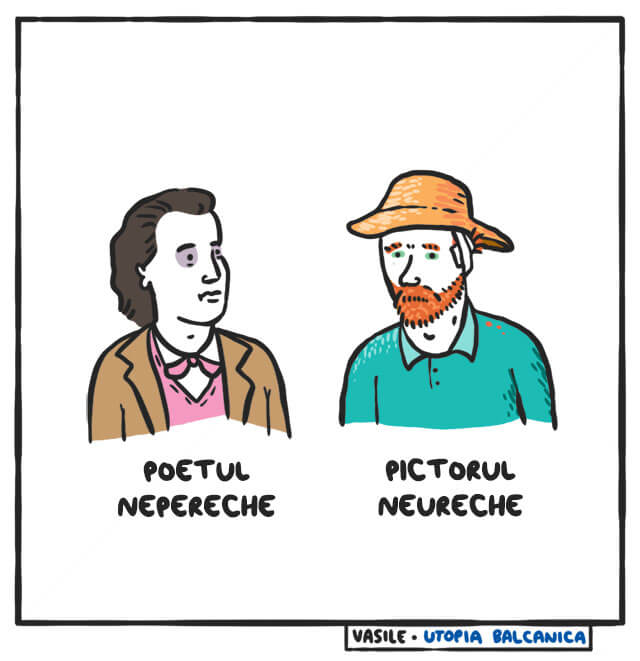 Vasile: Stopping time until I get all my work done, emails answered, house cleaned, files sorted, a whole bunch of money earned and a rustic little house built somewhere next to a reedy lake. Then turning time on again to hear the frogs sing.

Vasile: This morning it would be Poemul invectivă by Geo Bogza, “Inexplicable” by The Correspondents (the video is quite charming too) and Variola vera, a Yugoslav film about the last European smallpox outbreak.

Vasile: The inauguration of my private island, I guess? There would be rum and seafood and a tiny, completely unreliable satellite TV if it’s Eurovision-season. Nudism highly encouraged. People would casually talk politics with their dongs hanging out while the sun slowly sets into the sea. 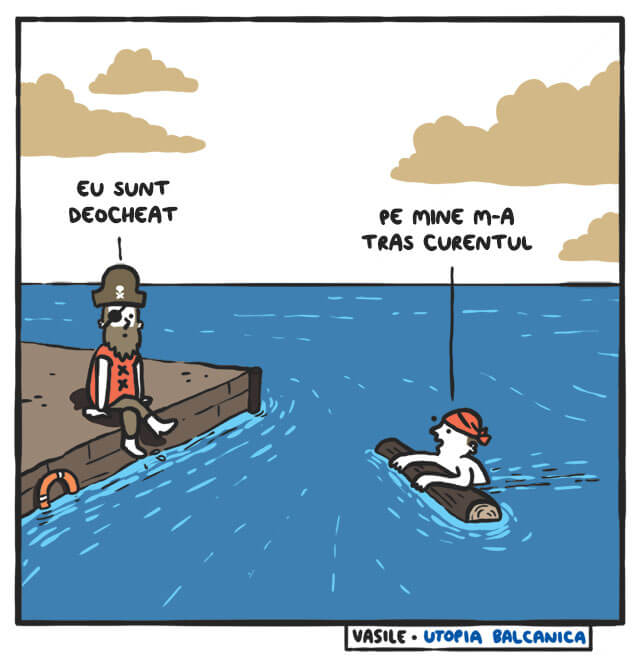 Vasile: No famous people allowed. It’s private. Plus there wouldn’t be enough rum for all the paparazzi or enough parking for their paparazzi-boats. Probably would have made an exception for Leonard Cohen, he knew a thing or two about life on a remote island back when life was his thing.

Thank you, Vasile, for being a part of it!