Discovering Ilinca’s colorful artwork displayed all over the town was a true pleasure. Feast your eyes with her work 😀

Ilinca: I’m a Digital Product Designer by day, a creative bird also by day, because I respect my beauty sleep. I make bold color combinations – pink is my spirit color, even though I hated it in my teen years. I have over 100 markers.

I’m a sucker for vintage cameras and lenses. I used to buy one piece of clothing per day, now I’m trying to sell most of my stuff, can’t stand the clutter anymore. I have a Computer Science degree which I found useless at some point in my career, now I consider it my shiny star. 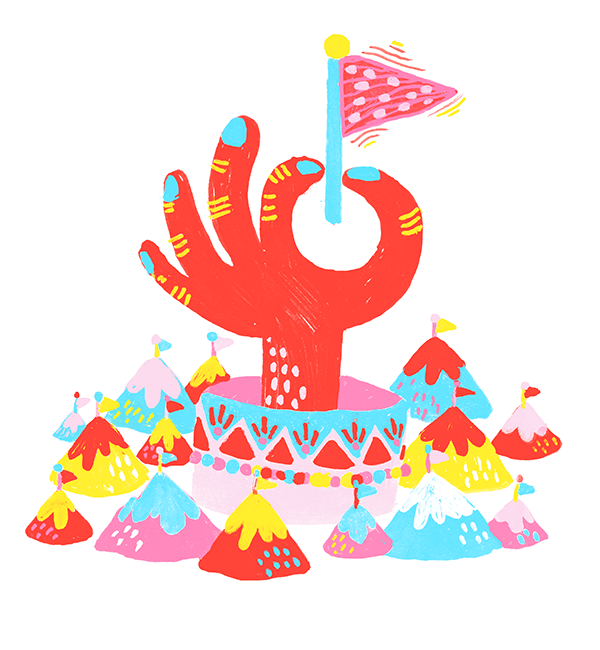 Ilinca: I think it was an average childhood, sprinkled with some over protectiveness from my parents. I wasn’t allowed to go outside and play with the other kids until they came back from work. So most of the day I was in my bedroom, drawing, cutting paper, playing with play-dough, mixing textiles, even messing with my mom’s makeup and drawing with her lipsticks (they look like crayons, ok?). 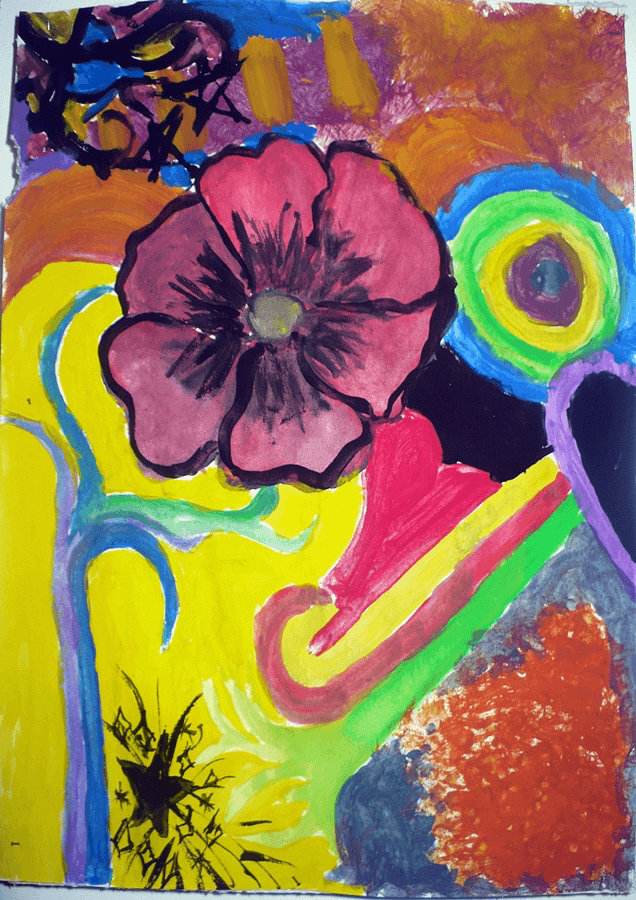 I did pottery, I learned how to braid, make friendship bracelets, draw illustrations for holiday postcards. Later on, all these tiny activities brought me my first cash. So yeah, I do regret not hiking more or going on Tom Sawyer-esque adventures, but I’ll have to admit that those times grew my interest in crafts and creative activities. Thinking about it now, I’m very grateful for those years, because they taught me that I have the power to create things out of almost nothing. 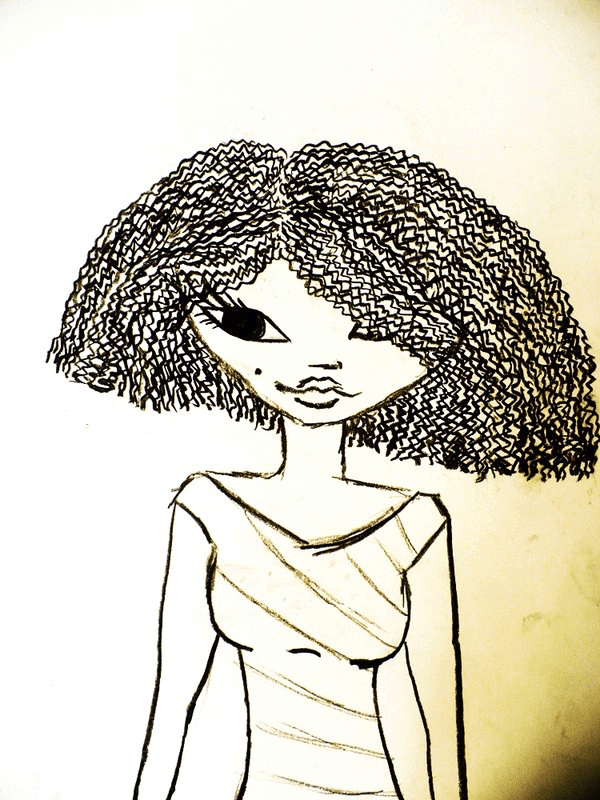 Ilinca: Totally wanted to be a painter, but mostly because I had a Barbie that was a painter. Thing is, now I don’t enjoy working in watercolor or oil, I just can’t get a hold on the technique. 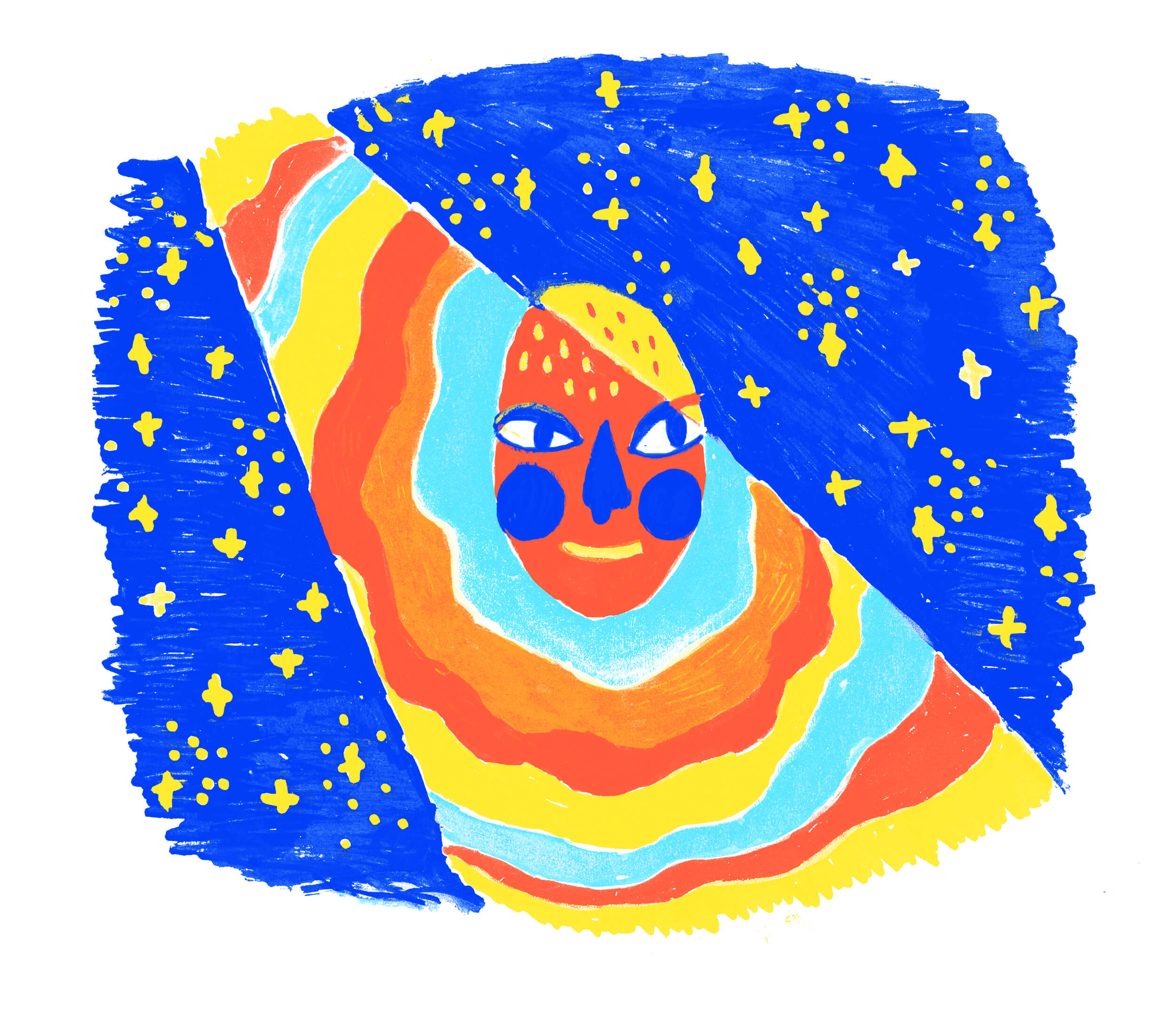 Ilinca: My workstation are my markers. If that makes any sense. I really don’t have a stable workstation. If there’s a flat surface, there’s a place to draw. 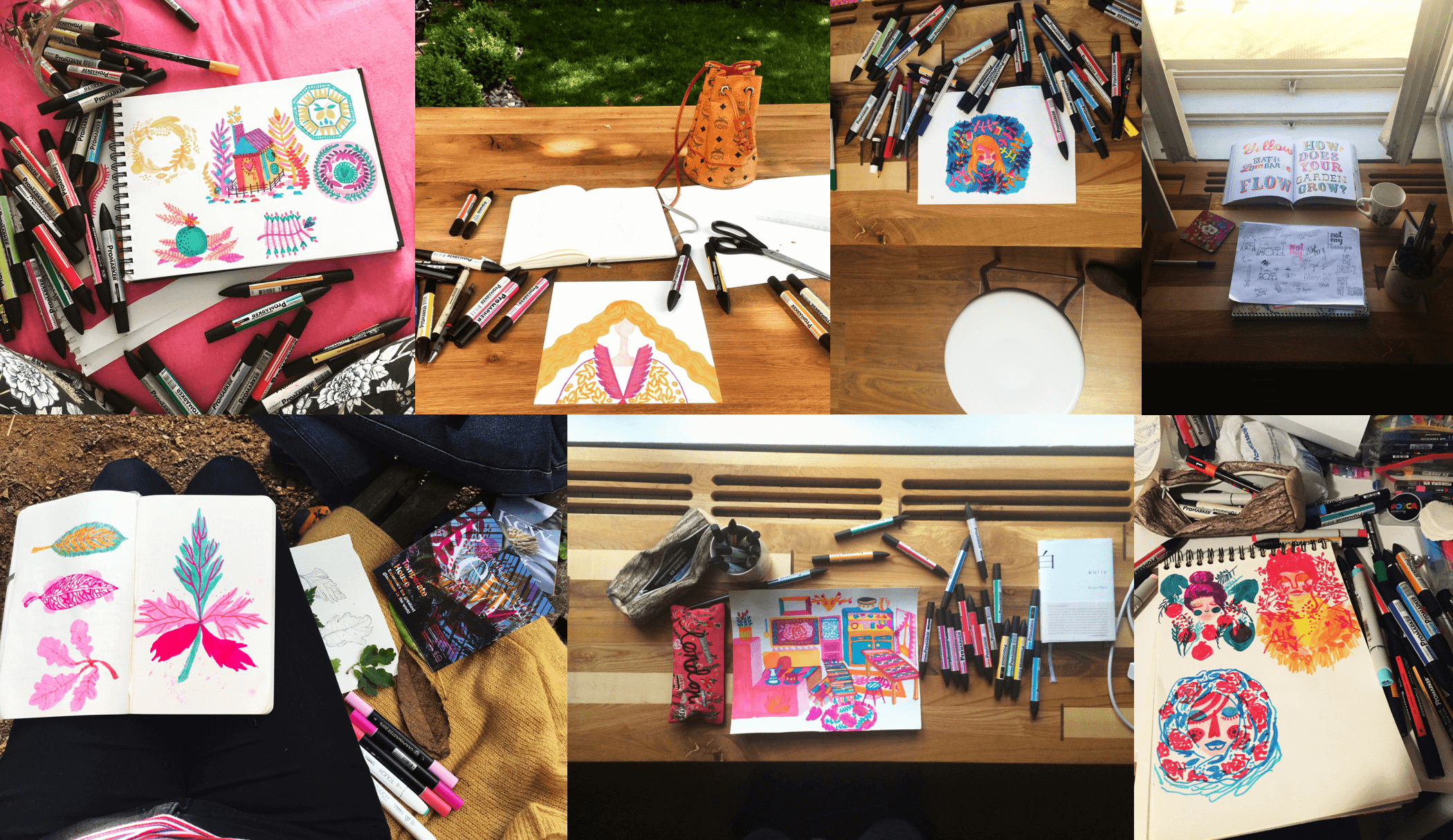 Ilinca: Sloppy naive. I never do a sketch, and if I ever do, I try to make it as simple as possible. But preferably no sketch. I overlap colors, don’t care if they mix up. I draw fast and on intense sprints and if I ever take a break from my drawing, I know I’m not going to finish it in the near future.

I’m not good at realistic artwork, I’ve had a slight try on that style, because my dad was into anatomy studies in charcoal and I wanted to do what he did, but I’m pretty bellow average. Therefore all my subjects are flat, 2D and if I end up needing to introduce some spatiality, I do it naively and sloppy on purpose, as if I were in kindergarten artsy-hour, so you don’t get to judge me on my metrics. 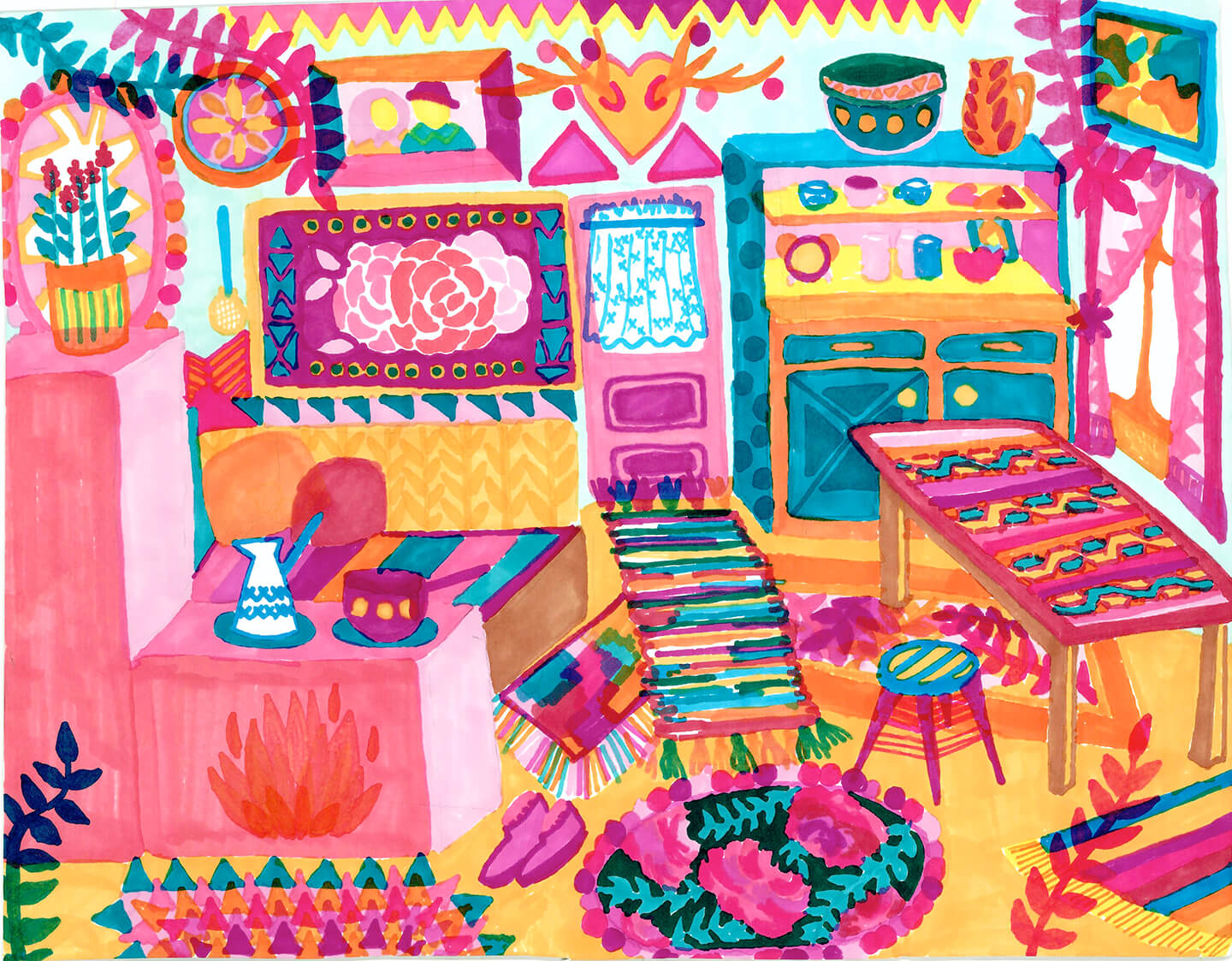 Ilinca: Most of the time it happens like this: I put all my markers on the desk and then choose one hue that I don’t want to use in my work. I usually remove blue shades, this is a pattern. Then it always starts from the center of the paper, but my work ends slightly to the left or to the right whatsoever. After that, it’s all about overlapping and exaggerating. More is more. When I think a piece of work is done, that’s the moment I add even more bedazzles, patterns, overlays, and colors. 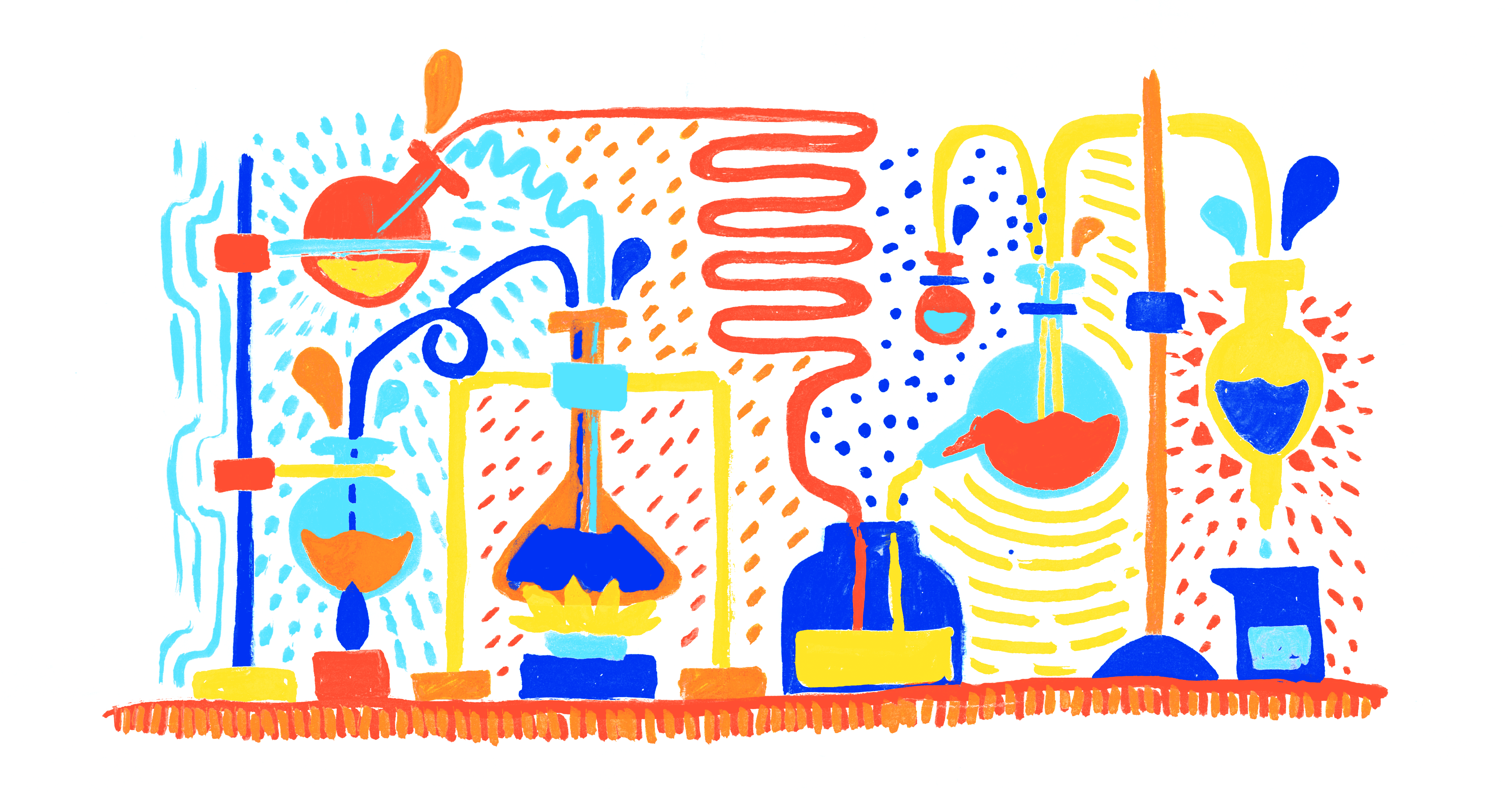 Ilinca: Mascarici – I like how well it works on tote bags, I always wanted to do a series on Romanian traditional masks (did just one though, but I’m happy with it). They are so colorful and exaggerated, I love them, all the volume and explosion feels like a bouquet of energy. 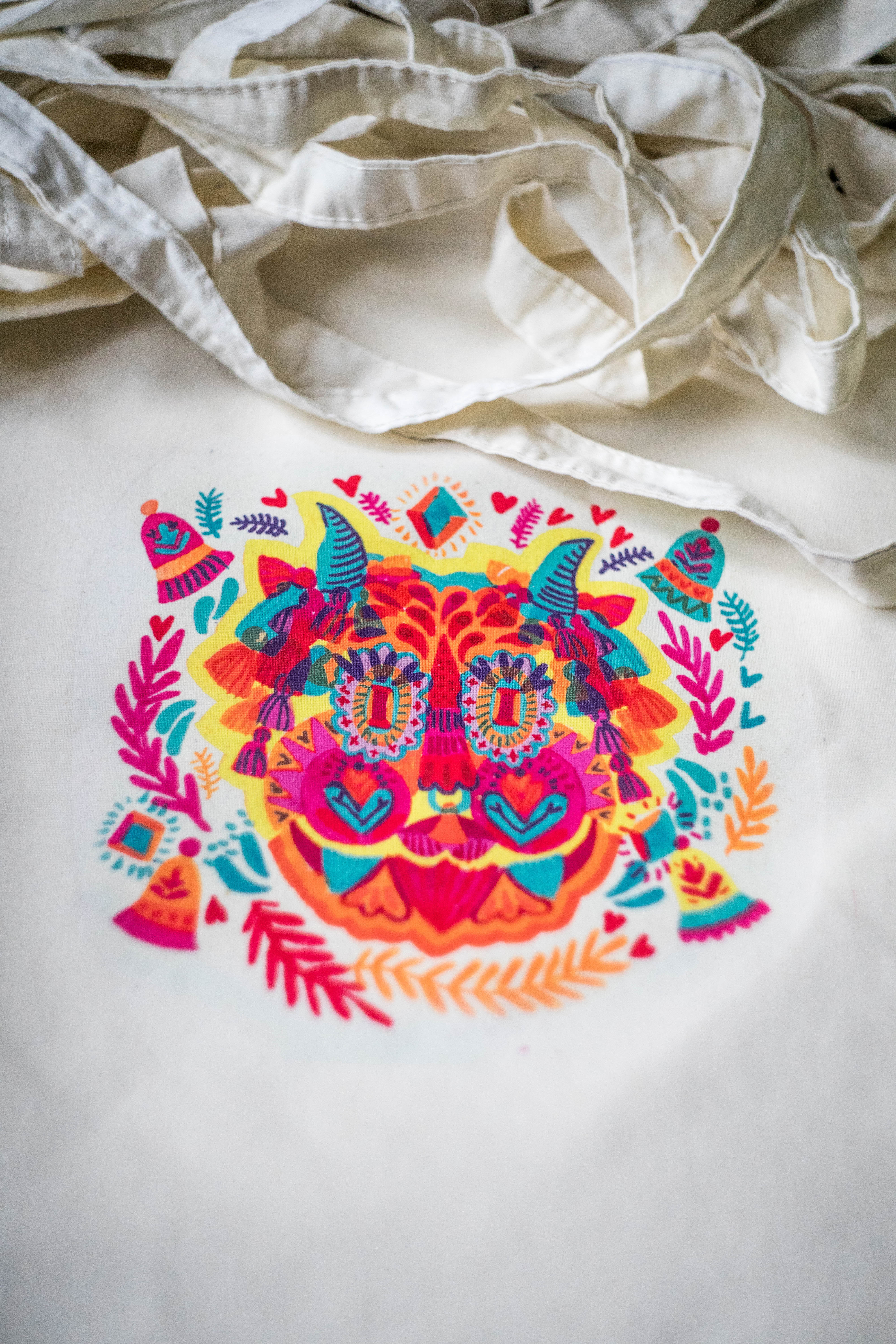 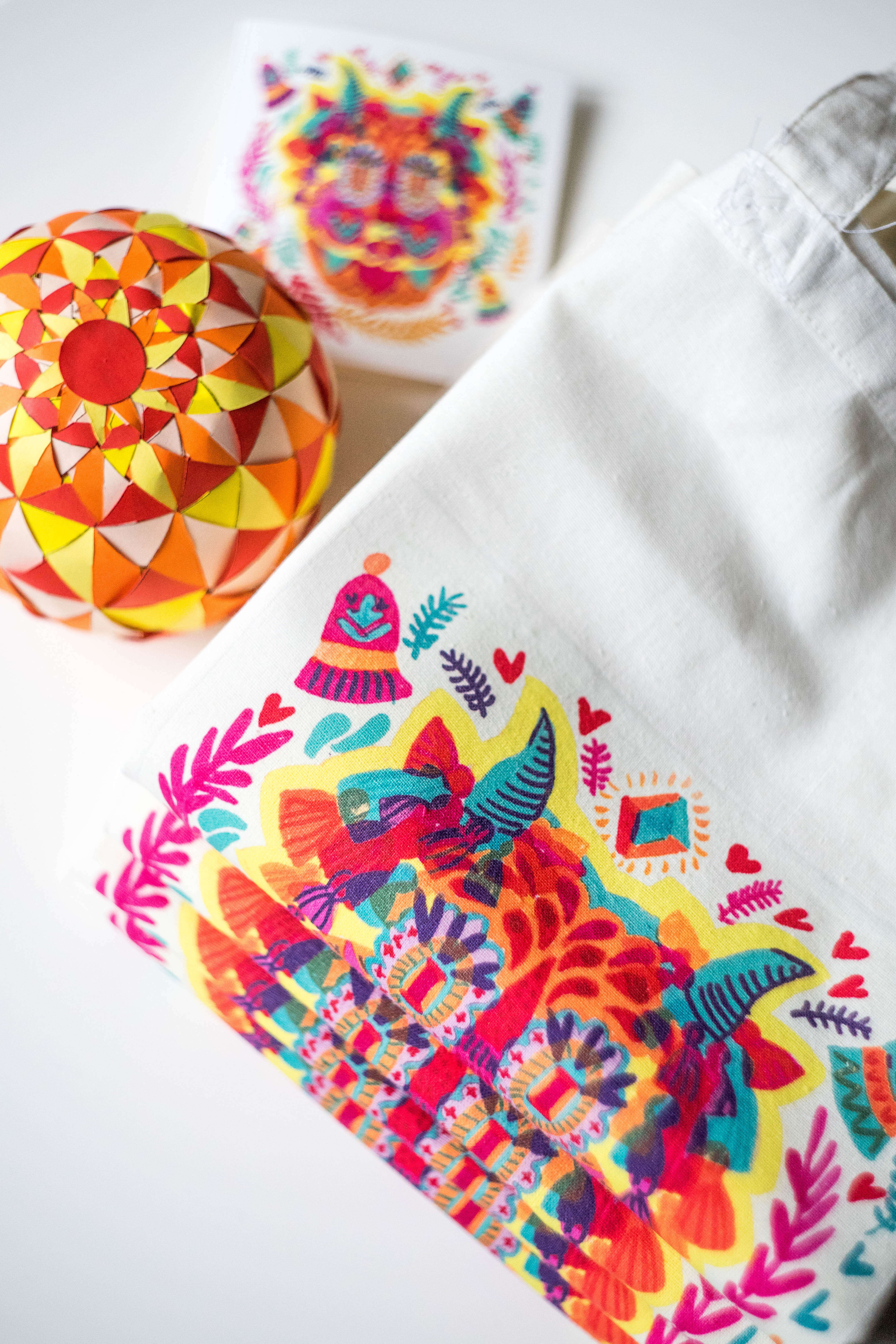 Ilinca: I must admit Diela Maharanie had a huge impact on my work, especially color wise. Other than that, I follow loads of artists on Instagram, but try not to get into the inspiration-lurking vortex too much so I can focus on actually building on my style. I also like mystical creatures that are brought to life through traditional costumes, like Kukeri. 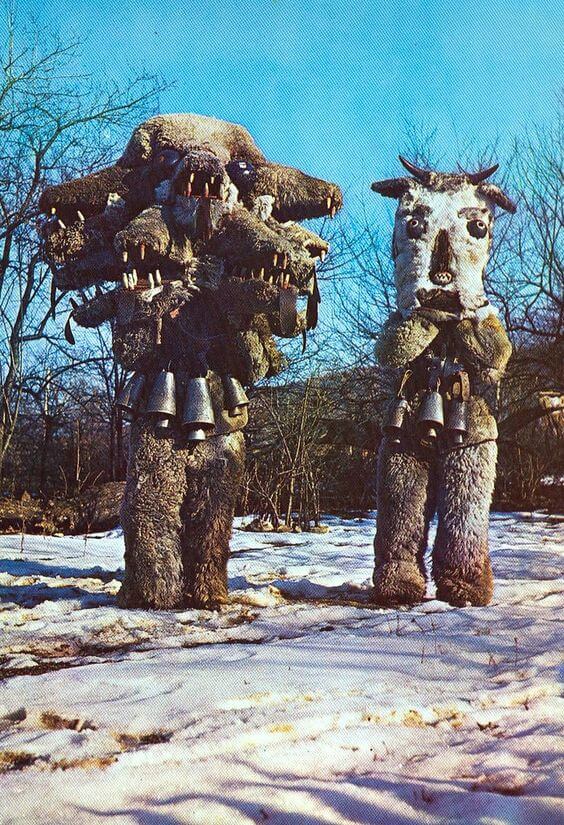 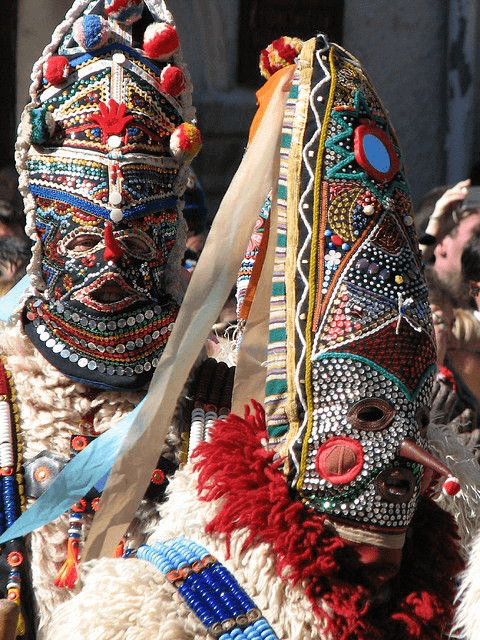 Ilinca: Spam the hell out of social media with what you’re doing. Like, be actually obsessed about posting your work. People whine about someone posting too many selfies, but have you heard someone complain of too many illustrations? Social media is the best thing creatives could have to catch a rocket to some cool collaborations, communities and eventually jobs. Shamelessly spam with your art. 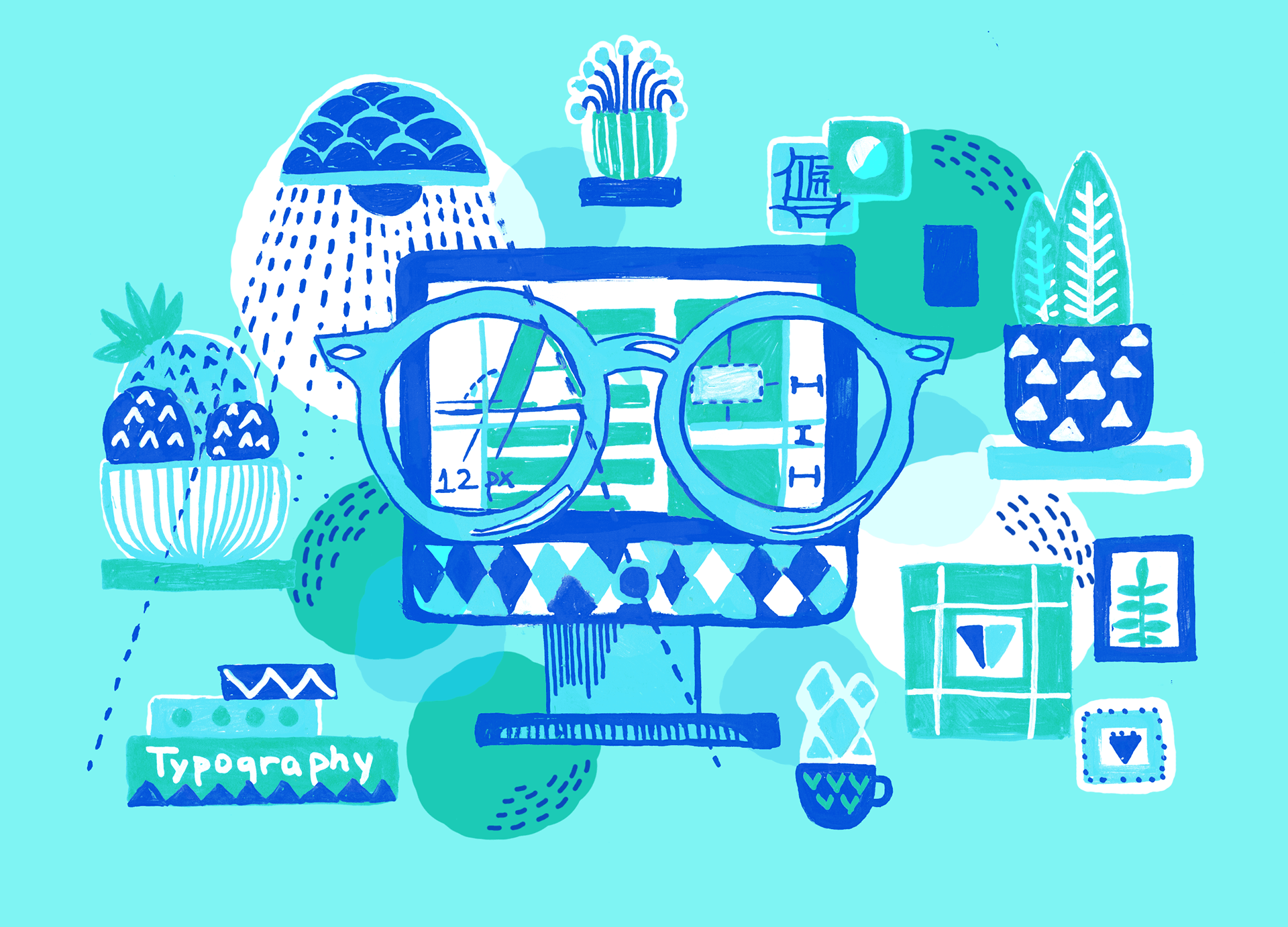 Ilinca: I would love to be able to duplicate myself, so I can draw and photograph even more.

Ilinca: Interaction of Color by Josef Albers – a fresh perspective on color theory, the sweet child of psychology, mathematics, and philosophy. Packed with great exercises he did with his students in order to prove concepts and explore color interaction.

Messer Chumps – Gotham City – A Scooby-Doo vibe, kind of makes you want to solve some mysteries around town. Also good for some goofy dancing, I guess you wouldn’t mind that much if you got them moves or not with such a song.

Amarcord by Federico Fellini – a great tableau of Rimini, Italy. The storyline is funny, but I find it just a pretext to get a thrustful glimpse in the Italian way of living – with the sound of waves and leaves in the morning, and the loud locomotion of the humans in the evening. A vivid invitation to appreciate life at its fullest. 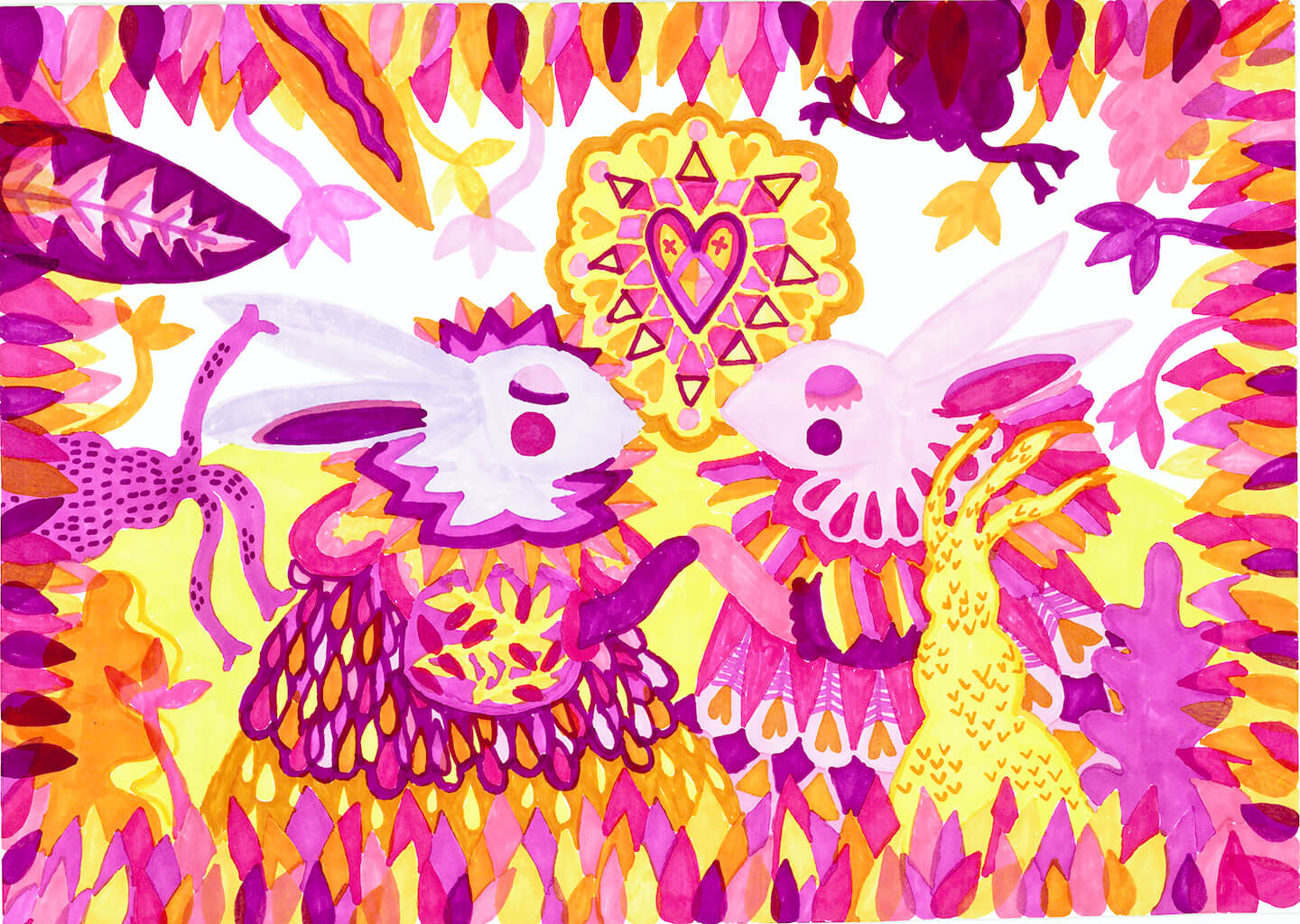 Ilinca: I think it would be a party where people could play around and have loads of childhood games like buckets with water and apples that pick them with your mouth, while you’re hands are tied. Hopscotch. Swings. A ceiling full of pinatas. Games, loads of games, and by no mean digital. It would be just to celebrate the good in our life through games and playfulness. Playing is so underrated, we need to play more.

Ilinca: I wouldn’t invite famous people at the party. If they’re famous, people will surely recognize them, so everyone will keep an eye on them. And they won’t feel good. I’d invite Woody Allen though, he cracks some pretty nice jokes. 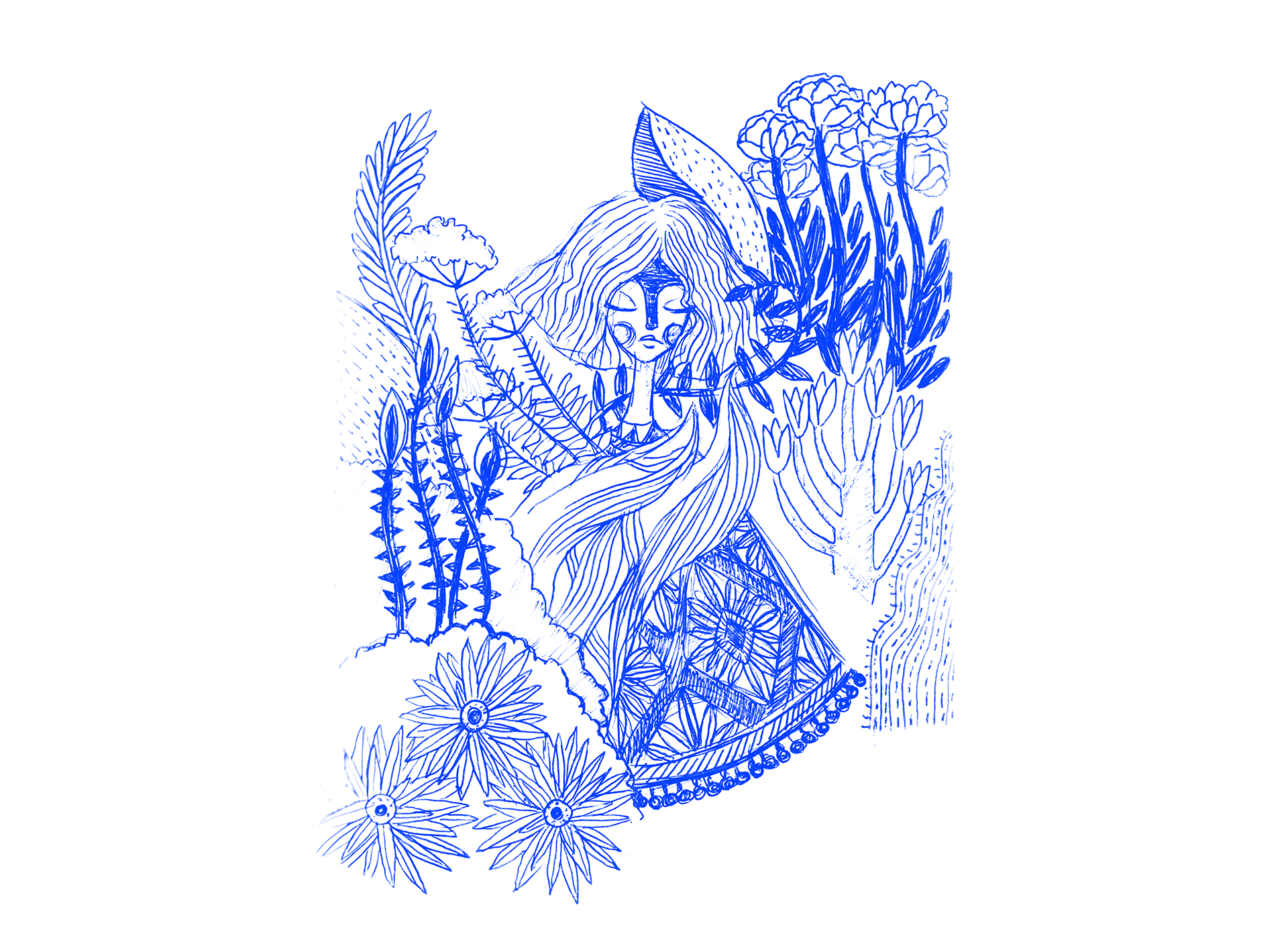 Thank you, Ilinca, for being a part of it!

For more of Ilinca’s work, you can follow her on the links: Ilinca on Instagram, Ilinca on Behance.